Regex Match AutoSuggest Provider is a Trados Studio 2014-2019 plug-in that enables you to show AutoSuggest entries that match regular expressions specified. With this plug-in, you can, for example, enter a word or phrase that does not need to be translated, such as a model number or serial number, by selecting the regex-matched suggestion from AutoSuggest.

The Regex Match AutoSuggest Provider view appears at the bottom of the Studio’s editor. 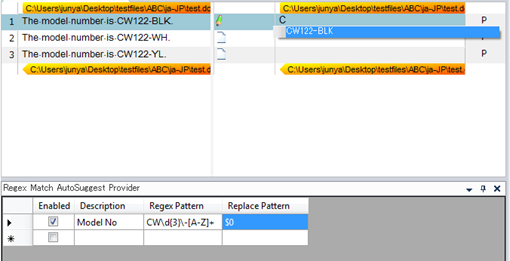 The version 1.4 or higher of the plugin supports the use of variables in regex patterns. A variable represents several pairs of source and target values defined in the Variables tab.
*The name of a variable cannot contain any symbols except _ (underscore) and cannot start with a number (0 to 9). 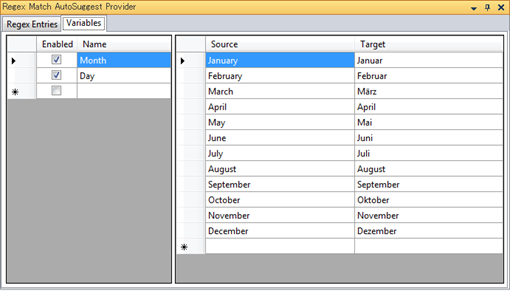 To use a variable in a regex pattern, enclose the variable name with # (number sign). In the following screenshot, the variable name Month is enclosed with #. In addition, remember to enclose it with parentheses when you want to reference it in the Replace Pattern field.
Currently, one regex pattern can only contain one variable.

Showing all the evaluated suggestions in a pop-up window

You can also list the suggestions in a small pop-up window by pressing Ctrl+Shift+F12. Press the Up/Down key or use the mouse to select a suggestion.

If you cannot see checkboxes under the "Enabled" column... 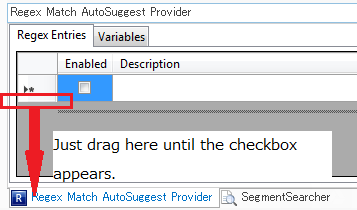